Why QSRs are the future of the Restaurant Industry 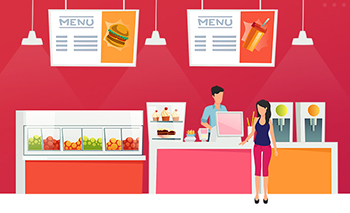 The Indian food sector is a huge market that has grown steadily and is valued at 3.7 trillion as of 2018, with an annual growth of around 10%, QSR (Quick Service Restaurants) and casual dining restaurants together account for more than 74% of the market and are growing exponentially.

We’ve all come across the name Quick Service Restaurant(QSR), but don’t know exactly what it is, so let’s define what QSR means, how it operates and why QSRs are the future of the restaurant industry?

Quick Service Restaurants (QSR) is nothing but an industry name for fast food restaurants that offer food items that have minimal preparation time and can be served almost instantly.

QSR joints often have minimal menus that focus only on one food theme, e.g. GOLI VADA PAV, one of India’s fastest-growing QSR chain stores focuses only on popular Indian snacks, vada pav and drinks that complement it.

Another Indian QSR giant, Fassos specializes in wraps and rice bowls as the main dish on their menus along with a few other variants. Global Food Giants, McDonald’s serve burgers mainly in their menu and recently have launched McCafe offering beverages as part of their renovated menus in India.

QSRs generally operate in chain models and are located in areas where high customer footfalls are expected.

Food is primarily prepared in the central kitchen and the final stage involves mostly assembling and heating. Employees are not required to make any kind of recipe or ingredient management, meaning that there is little training involved and that the salary cap is lower compared to traditional restaurants

Going forward, CARE Ratings expects the restaurant and foodservice industry to record an increase of about 10.4 percent in CAGR over the next 5 years between 2018 and 2022 to cross Rs 5.5 trillion by 2022, with QSRs expected to play an active role in this growth.

The growth of QSRs might be due to various reasons including:

Millennials in the 15-35 age group are among the highest spending groups and most likely spending quite a sum of their earning on food, these are the ideal target demographics that QSR targets as potential customers, Fortunately, the current age demographics are expected to boost sales as India’s median age is 26.7 years, one of the lowest globally compared to 37.2 years in the US, 45.8 years in china.

Hardcastle Restaurants, owner and operator of McDonald’s restaurants in west and south India, plans to invest Rs 800 – 1,000 crores over the next 3 year period to introduce healthier options (low-calorie, low-fat alternatives) and digitize its stores to attract millennial.

With India’s fast-growing economy growing at a CAGR of 9.8% fueling the country’s consumption boom, which has directly increased the number of times Indians have food outside, “Indians have food outside at least 6 times a month”, and this number is certainly looking to go up, backed by higher disposable income amongst millennials, favorable demographics and increasing internet penetration.

With more and more people able to access high-speed internet in Tier two and three cities, along with the impact of online ordering vendors including zomato, swiggy has had among the smaller city audiences, the demand for fast food is on the rise as customers want the same comfort and privileges as those in the metro.

Chain QSR outlets are expected to expand their presence in multiple non-metro cities across the country to meet the growing demand.

As of June 2018, India’s Internet penetration in urban areas stood at 82.1 percent and 19.5 percent in the rural areas, the number of active Internet users in the country is the second-highest worldwide and the data usage level of 8 GB per month is comparable to that of developed countries.

Although it is relatively easy to start a QSR outlet compared to a fine dining restaurant as the capital investment involved is less, the competition in the Indian QSR segment is extreme and you need a complete restaurant management software that will allow you to manage your QSR operations efficiently, increase customer footfalls and maximize your profits.

This article would have definitely given you a clear picture of the growth of QSRs and why the future looks bright for quick-service restaurants in the country. Share your views below.